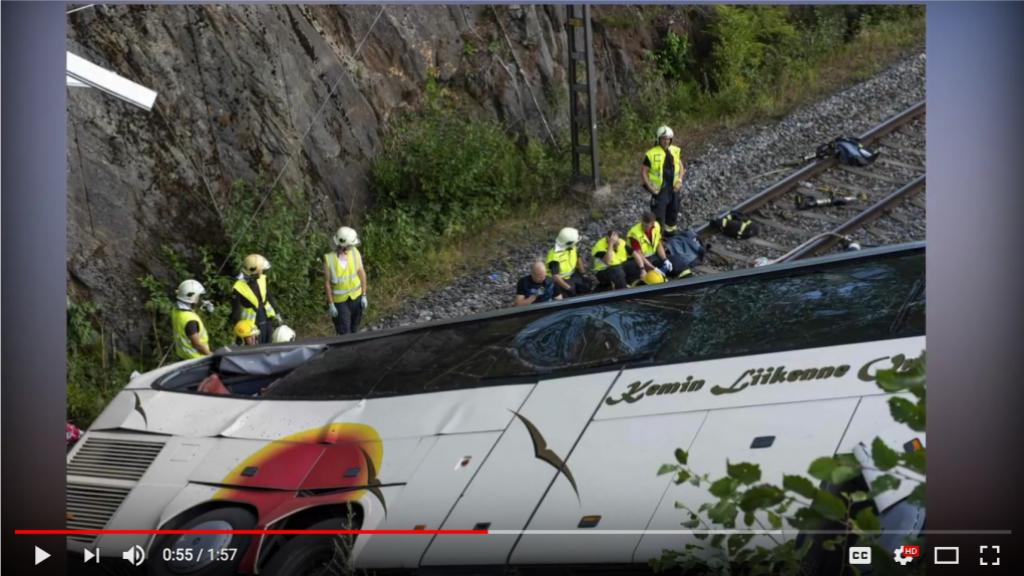 A bus has crashed and fallen down from a bridge south of Kuopio in Finland. Four people died in the accident, reports the news agency STT.

The bus landed on a train track, according to the news agency.

"The bus fell 7-10 meters down from the bridge and on to the railroad. It was a loud bang. We immediately saw that some of the passengers were dead. The bus was sandwiched between the rocks and the vehicle was partly suspended in the air. This made it difficult to perform the extrication work", says rescue director Petteri Lintunen to SPT.

Four people were seriously injured while six were treated for minor injuries, SPT writes. An additional nine people have been taken to hospital for check ups.

One witness tells the Finnish TV network Yle that the bus, which had about 20 passengers, passed over  a ramp at high speed, almost turned over on two wheels. It crashed into several cars before driving off the bridge and down onto the railroad track.

The passengers were on their way to a spa hotel when the accident occured.

Five passenger cars were involved in the accident, reports the police in Eastern Finland to SPT.

The cause of the accident is not clear, but the police believe it might be due to a technical failure in the bus, writes SPT.

The President of the Finnish Parliament, Paula Risikko, has expressed his condolences to the families of the dead, writes Yle.